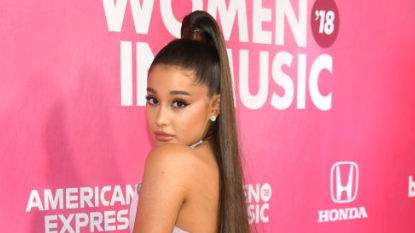 The room was full of some of the most pioneering women in music history including Alicia Keys, Trailblazer Award winner Janelle Monaé, and Cyndi Lauper, who was honored with the Icon Award.

Patti LaBelle presented Ariana Grande with the Women of the Year Award, where she performed her hit song “Thank U, Next,” sporting her signature high pony-tail, thigh-high boots and wearing a pre-fall Christian Siriano mini-dress that has yet to hit the runway.

“I want to say that I find it interesting that this has been one of the best years of my career and like the worst of my life. I’m not saying that for sympathy. I’m just saying that because I feel like a lot of people would look at someone in my position right now … and think, ‘She’s really got her shit together,’ you know? Like, ‘She’s really on it.’ Like, ‘She’s got it all,” Ariana said in her candid acceptance speech. “I do, but as far as my personal life goes, I really have no idea what the f–k I’m doing,” she admitted.

From Ashley Graham to Dua Lipa and Maggie Rogers, check out all of the leading ladies in the gallery above.