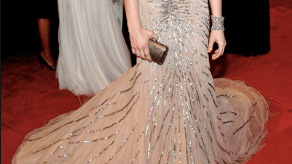 The iconic handbag designer Judith Leiber passed away Saturday, April 28. She and her husband died at age 97 just hours apart from each other.

Known for her crystal minaudières clutches and exotic designs, Judith Leiber has left an astounding mark on not only the fashion industry, but also on every major red carpet. From Blake Lively’s wearing the epic Koi Fish Clutch to Margot Robby carrying the Bunny Crystal Clutch at the “Peter Rabbit” film premiere and multiple appearances on “Sex and the City”, Judith Leiber’s tiny encrusted purses have made a big impact in Hollywood dating back to the 50’s.

Leiber received a Lifetime Achievement Award from the CFDA in 1994 and went on to win numerous other awards including the Visionary Woman Award in 2010. From Holocaust survivor to one of the most prestigious handbag designers in the world,  Leiber’s legacy will continue to live on through her sought-after designs.

Check out the gallery below to see how some of our favorite red carpet moments featuring Judith Leiber handbags.